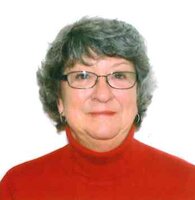 Gail Karen Dufelmeier Stremel was born in Jamestown, North Dakota on March 16, 1942. She grew up in small towns in North and South Dakota. She graduated from Chamberlain, South Dakota High School in 1960. A national merit scholarship brought her to Macalester College from where she graduated in 1964. She later earned a Master’s Degree in Public Administration from Hamline University. Upon graduation from “Mac”, Gail started a career in social work at the then Ramsey County Welfare Department. Over the next several years her career took her into management. When she retired in 2003, she was the Director of the Income Maintenance Division of the Human Services Department of Ramsey County. While at Macalester, Gail made life long friends and particularly among the women who lived on “Wally South”. Those friendships led among other things to many trips across the US and elsewhere. She also shared a number of trips, with women friends, to both the BWCA and the Quetico. She relished her expertise at being able to navigate in the wilderness. She was also proud of the strength and skill she developed doing both long and short portages Gail was a life long lover of animals especially dogs. Her several dogs, and eventually two cats, were like her children. She volunteered for decades with Second Chance Animal Rescue and was a foster mom to about 125 dogs. She dutifully made and kept an illustrated scrapbook with a page for each dog with a profile of their personality and their time with her. She also volunteered with Meals on Wheels and Joseph’s Coat. She served on the Board of the Salvation Army. She volunteered to serve on the Ramsey County Lawyer’s Ethics Committee. Her service there led to an appointment by the Minnesota Supreme Court to the Lawyer’s Professional Responsibility Board on which she served two terms. She was a member of Chapter BL of the PEO Sisterhood and also served as the state chair of the PEO Home Fund. To know Gail was to know a woman who always found ways to help others in a variety of ways. Her empathy for others extended to being there for them in a variety of crises. She also enjoyed simple pleasures like hosting dinner parties for her friends. She contributed generously to a number of social welfare causes. Her guiding life principle was always: “what can I do to help others?” In her personal life, she was fiercely independent. After a divorce early in her life, she convinced a skeptical mortgage company of her credit worthiness and became a single woman who owned her own home. She handled many of the challenges faced by single women with skill and grace. Before and after retirement, Gail greatly enjoyed spending time at a cottage built by her grandfather on Clitherall Lake in Ottertail County. Lake trips helped her recharge her spirit and find peace and quiet. In the near future, her ashes will join those of many of her pets who lie along the stream that runs behind the cottage. Gail was preceeded by her parents, Harold and Mabel Kipp Dufelmeier of Chamberlain, South Dakota and her brother in law, J.R. Kotewa. She is survived by her sister, Jane Kotewa of Fairmont, Minnesota; her nephews, James and Kevin Kotewa; grandnephews, Mathew and Lucas. She is also survived by her life partner, Don Gemberling of St. Paul. Gail and Don were together for almost 30 years. She was and is also loved as an honorary mom and grandmother by Samantha Gemberling and her sons Sebastian and Christian, grandsons of Don. Her animal family, Dickens and Lio, miss her greatly. Gail asked that no services be held. Her family and friends hope to be be able to celebrate what would have been her 80th birthday on March 16. She would much appreciate any memorial you might make to Second Chance Animal Rescue, White Bear Lake, or to a charity of your choice. Gail’s service, kindness, and love changed the world.