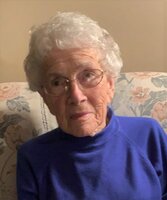 Flynn, Sue (Wellenstein) Age 94 of West St. Paul Passed away Sunday, February 20, 2022 Survived by Mike and Mary Flynn, Chris Anderson, Tim and Jane Flynn, Peggy and Scott Peters, Dan and TerriAnn Flynn, Molly and John Delmedico, Mary and Joe Delmedico, Theresa and Al Lummis, Mark and Michelle Flynn, Cathy and Joe Davich, Pat and Sue Flynn, 30 grandchildren and 30 great-grandchildren with more on the way. Preceded in death by Chuck, her husband of 63 years, infant grandchildren Andrea and Ben and great-grandchildren Abe Flynn and Hunter Peters. Mom was proud of her family. At medical appointments, she was always quick to tell the provider about her family. She would explain that she had 11 children. She shared that we all lived in the 7 county metro area, Lakeville to the south and to Ham lake to the north. She would state, with much pride, that we all spoke to each other – even civilly- could be in the same room with each other and our spouses, and that no one would leave the premises if another arrived. Mom was very resourceful. Not only could she stretch a dollar (ie: creamed wieners and government cheese) but she managed to make due with one family station wagon. Oh, that wagon. Saturday afternoon it would be filled with groceries, usually from 3 different stores; she went where the deals were. Yes, Mom worked long and hard to make sure the household ran relatively smoothly. One son, (who shall remain anonymous) happy with a full stomach and the freedom to play at will (once chores, homework, and the one hour of forced quiet time was complete) remarked in a testament to Mom: "Everything is so wonderful, the only way heaven could be better, was if there were flowers upon every garbage can." Raising kids on a "Catholic block", mom and dad had a village to help raise the kids. Mom’s father, Leo (Duke) Wellenstein, was the senior Vice President of NSP [Northern States Power (now Xcel Energy)}. Whenever grandpa heard that mom was going over to a neighbor’s house for coffee or lunch he said he prayed, all afternoon, that there would not be any natural gas explosion. He would tragically lose a daughter, have 11 motherless grandkids and a public relations nightmare. There would be 53 single parent kids from 5 families on account of an NSP gas leak. There were another 55 kids living on the block that would be safe! Mom started volunteering outside the home when Pat, the youngest, started kindergarten. Her first stint, lasting 8 years, was listening to beginning readers at St Mark's School. After spending the next 4 years handing out bus passes at Cretin, she moved on to St. Joseph's Hospital surgery waiting room and then to the gift shop where she earned a pin for 25 years of service. She hadn't forgotten St. Mark's, though: Sue was the "jewelry lady" at the spring and fall rummage sale for 50 years – quitting because Covid shut down the sale. Mom went back to volunteering, in the St Mark's school office, when she was 88. Much of Mom's spare time was spent knitting. Each of her children received an individually designed knit afghan on their first wedding anniversary. She also knit different Christmas stockings for each family member to be hung by the chimney with care. The grandchildren and great-grandchildren were lucky enough to receive a hand knit sweater that she designed and painstakingly clicked away at the needles until it was complete. There were years when she made 3 sweaters or more for her growing family. She has a "stash" of 12 sweaters to be handed out as new great-grandchildren are born. In her later years, she met monthly with ladies from St. Mark's to knit "prayer shawls" to be handed out to the sick. If you have seen her arthritic hands, you know how amazing all that knitting was!! There are many family traditions that Mom created and continued even up to the end. She brought this huge family together for such celebrations as St. Pat's Day, Tree Day and Flynn Family Weekend-in a way you just don't see too often. All the grandchildren and great-grandkids love to be together and second cousins know each other and look forward to being together at those events. Cabin time with Mom was the best! We would be up until way after midnight – night after night – on her beloved screen porch (who's door had best not be left open or slammed) – talking, laughing, eating popcorn, & playing games of cribbage and Oh Hell. She hated getting skunked, even if it happened VERY rarely. After Dad died, she was up for traveling anywhere and continued to add to her travel fund and magnet collection until she passed. A few of the places she traveled to are the Panama Canal, Alaska, Mexico, Guatemala and Virginia. She loved to look out the window as we drove to our next site, giving directions and commenting on how similar or different the area was from Minnesota. One friend of the family summed up mom with the following words: “Your Mom was such an inspiration to me. Such a strong, independent woman who lived her life to the fullest – and loved and cherished her family. She was a beautiful and vibrant soul. My heart aches for your loss – and for all whose lives she touched. Rest In Peace Sue.” Visitation from 5:00 – 8:00PM Wednesday, March 2nd at Willwerscheid Funeral Home, 1167 Grand Ave., St. Paul. Mass of Christian Burial 10AM Thursday, March 3rd at the Church of the Assumption, 51 7th St. W., St. Paul. Visitation one hour prior to mass at church. In lieu of flowers, memorials preferred to Cradle of Hope. Visitation 5 - 8pm Wednesday March 2nd at the Willwerscheid Funeral Home, 1167 Grand Ave. St. Paul and at church 1 hour prior to the mass (9-10am). Mass of Christian Burial 10am Thursday March 3rd at the Church of the Assumption, 51 Seventh St. W. St. Paul. In lieu of flowers, memorials preferred to Cradle of Hope.