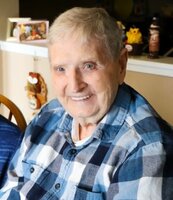 James Johnson Beloved Husband, Father, Grandfather Passed away January 14, 2022, at the age of 97 James (Jim) A. Johnson was born August 14, 1924, son of the late William Otis Johnson and Boba Dilla (Townsend) Johnson in Alexander City, Alabama and as the youngest of 11 siblings. He was preceded in death by brothers; Rowe, Herman, Levi, Thomas, William Otis Jr, Oel, John and Merrill and sisters; Mary, Boba Dilla and Irby Louise. Jim met Dorothea M Draeger in 1952 after graduating from Auburn University in Auburn, Alabama and they married on August 20, 1954 in St. Paul, Minnesota. He owned Highland Park Florist in St Paul for 23 years. He was well known for his easy laugh, artistry as a florist and care for his employees and customers. After selling the shop in 1980 they moved back to Opelika, Alabama. During their retirement, Jim and Dorothea traveled extensively throughout the US, Europe and Asia. He was a great fan of the Auburn Tigers football and basketball teams. War Eagle! They moved back to Minnesota in 2016. James Is survived by his loving wife of 67 years, Dorothea and daughter Kathy (Matt) Geiser and son Joel (Hiromi) Johnson along with grandsons, Johnathan Geiser, Phillip Johnson and Christian Dunayeva. We are thankful for the great care Jim received at Lilydale Senior Living for the past 5 years. A memorial service is being planned for later in the year. A memorial service is being planned for later in the year.