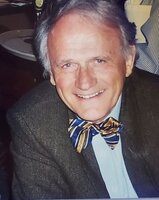 Lee Elwood Snook March 14, 1930 to December 23, 2021 Lee Elwood Snook was born in Lewistown, Pennsylvania on March 14, 1930, the second son of Clair and Sarah Snook. He married Lois Kerstetter on December 27, 1952. He and Lois are survived by Stephen, married to Rosine, David, married to Susann, Emily, married to John Brown, and Beth, married to Ralph Dolce. Their twelve grandchildren are Miriam, who died in 1998, Suomo and Gabriella Snook; Angela and Jason Snook; Jeffrey, Sarah, Katherine, Mark and Rebecca Brown; and Christopher and Elizabeth Dolce. Their great granddaughter is Lily Grace Snook. The first member of his family to attend college, Lee met his future wife Lois in freshman English class at Gettysburg College. Lois was also the first member of her family to attend college, and they soon were blessed by a marriage of nearly seven decades. Their ever-deepening love combined luminous romance with durable companionship, a shared passion for travel and adventure with a love of literature and the arts. From boyhood Lee knew he was called to serve God. Following college, Lee went on to attend Gettysburg Theological Seminary. Once ordained, he served in three different congregations where he was pitch-perfect leading through the Lutheran liturgy each Sunday morning. The congregations were St. Luke Lutheran Church in Roaring Spring, Pennsylvania, Good Shepherd Lutheran Church in Harrisburg, Pennsylvania, and St. Luke Lutheran Church in Ithaca, New York. While serving the dual assignment of senior pastor at Cornell University and senior pastor of St Luke Lutheran church "at the Cornell campus gate" Lee completed his Ph.D. from Union Theological Seminary in record time. His dissertation broke ground and he broke ground again when he introduced Process Theology to Luther Theological Seminary where he taught for three decades. The attestations of Lee's former students speak volumes about the effect his teachings had on their future ministries. Beyond bringing to the seminary a new way of seeing God in the world, Lee and his beloved wife Lois opened the seminary to the world. It began when at Lois' instigation Lee accepted a position as visiting professor at the University of Zimbabwe. During their years in Harare they launched the Lutheran House of Studies and then the Luther Seminary Program in Zimbabwe. Through these initiatives a steady stream of seminarians and professors of theology were able to study and learn from Christianity in Africa. Central to the program was a seminar titled "Christianity and Culture in Zimbabwe". It is impossible to know in what ways or in how many ministries the program's effects played out, but it is possible to say that Lee and Lois Snook built a bridge for the Holy Spirit from Africa back to America. Four days shy of what would have been the 69th anniversary of his marriage to Lois, Lee crossed over to rejoin her. He has gone to his reward after a life of 91 years, a life of faith, a life of hope, and a life of love. Service at a later date.