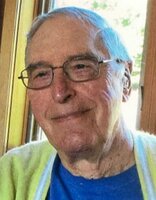 Glenn Howard Schnadt, age 95, passed away Sunday, August 8, 2021, in Bloomington, Minnesota. He was born October 21, 1925, in Bartlett, Illinois to the late Herbert and Alice Schnadt. He is survived by his wife Mary (Seise), children: Tom Schnadt (Janelle), Ann Hallberg (David), Sara Schnadt (Ted Hanna), grandchildren: Gwen Hallberg, Katie Dorsey (Tim), Dan Hallberg (Katie), and three great grandchildren: Henry and Lucy Hallberg and Rosie Dorsey. Glenn enlisted in the army after high school graduation and served in France for three years during WWII. Upon his return, he graduated with a degree in economics from Grinnell College in Iowa, where he met Mary, his life partner of 70 years. Glenn worked as a banker at the First National Bank of Barrington, Illinois for 34 years where he advocated for customers who were trying to better their lives. To this day, clients remark on how much they appreciate his belief in them and his support of their dreams. Glenn and Mary retired to a farm in Richland County, Wisconsin where he established a tree farm and enjoyed gardening and beekeeping. He and Mary built another home near Richland Center before moving to Minneapolis, Minnesota in 2016. Over the years Glenn enjoyed many interests including family camping, canoe trips in the Boundary Waters and international travel. He was also active in the Democratic Party, Kiwanis Club, Frank Lloyd Wright A. D. German Warehouse restoration in Richland Center and served on several administrative boards. Glenn passionately pursued his belief that individually a person could positively influence a community with personal actions, as evidenced when he had solar panels constructed at his Richland Center home. Glenn believed in supporting his family, civic duty, hard work, the power of education and generously offered a hand up to many people. Services are pending. Donations in Glenn's honor can be made to: A.D. German Warehouse: ADGWC, Inc. P.O. Box 436 Richland Center, W I, 53581 Passages Domestic Violence Center: Passages P.O. Box 156 Richland Center, WI, 53581 Additionally, please honor Glenn by performing an unexpected act of kindness. Services are pending.