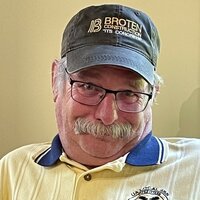 Gary James Genz age 67, of Mendota Heights died peacefully surrounded by his immediate family on Friday, June 25, 2021. He was an amazing man who left his mark on this world and all that knew him. Preceded in death by his parents, Carl and Veronica Genz. Survived by his wife of 44 years, Toni (née Hodgdon), daughter Cassie (Josh) Schmid; grandsons Monty and Leo; brothers Greg, Carl and Kevin, sisters Geraldine and Veronica along with numerous nephews, nieces, their spouses and children. Gary was a graduate of Brady High School in West St. Paul and then went on to serve in the US Navy. Upon his return from service, he attended trade school and was a proud Pipefitter with 36 years of service with the Steamfitter Pipefitter Local 455. He valued the union and through leadership positions on the JATC Committee and as an Executive Board Officer he worked to promote the trades and the positive impact trade skills have on our community. Gary was incredibly kind, honest, thoughtful and put his family above all else. He cherished his family, not only who they are but also where they came from. As the family historian, he would receive calls at all hours of the day to settle a bet or correct some portion of a story that had been misconstrued. His ability to keep names, dates, locations and every other pertinent detail straight in his mind was astounding. Gary was a natural storyteller and while most of his stories were factual, he did from time to time embellish just to keep everyone on their toes. The mix of fact and fiction ensured that his stories where always legendary. Part of the legendary factor of Gary's stories were the nicknames he attributed to those that he loved most. Nicknames came in various forms, everything from Babycakes, Dog, Munchkin, Kego, Rat, Dusty, Buckshot and he of course had the best nickname of all, Horneye. There are many stories of how this name came to be, regardless of the origin it will live on forever like all good legends. There were many places where Gary's stories flowed freely. Sitting around the kitchen table, atop a barstool and of course at his treasured cabin in Northern Minnesota. Up there, Gary loved the ability to tinker with his Allis-Chalmers tractor, four wheelers and anything that would fit on his workbench. He loved the land, the nature and most of all the close-knit community that surrounded him there. The one constant in Gary's life, was his connection to others. Wherever he went, whoever he talked to, he knew EVERYONE. Even if they had just met, he'd always find a way in which they were connected. Either they were cousins of cousins, or they went to school together or they worked together at some point. Gary never blended into the background, he was always front and center. Not in the limelight but ensuring that those around him were. Making sure everyone else felt loved, supported and above all welcomed. His open arms and heart are something that we should all strive to carry on in his memory. A special thanks to the staff at Essentia Health-St. Mary's Hospital in Duluth for the care and attention they gave Gary during his last days. Mass of Christian Burial 11:00 a.m. Wednesday, July 7th at the Church of St. Peter, 1405 Hwy 13, Mendota. Visitation 6-8 p.m. Tuesday, July 6th at Willwerscheid Funeral Home, 1167 Grand Ave, St. Paul and at church one hour prior to mass. In lieu of flowers, the family asks that you donate to The Dakota County Library Foundation (dclfoundation.org/donate) or Vision Loss Resources (visionlossresources.org/giving). Gary was an avid reader and user of the Dakota County Library system and was assisted greatly by Vision Loss Resources with his declining eyesight. It would be appreciated to honor him in this way. Mass of Christian Burial 11:00 a.m. Wednesday, July 7th at the Church of St. Peter, 1405 Hwy 13, Mendota. Visitation 6-8 p.m. Tuesday, July 6th at Willwerscheid Funeral Home, 1167 Grand Ave, St. Paul and at church one hour prior to mass.