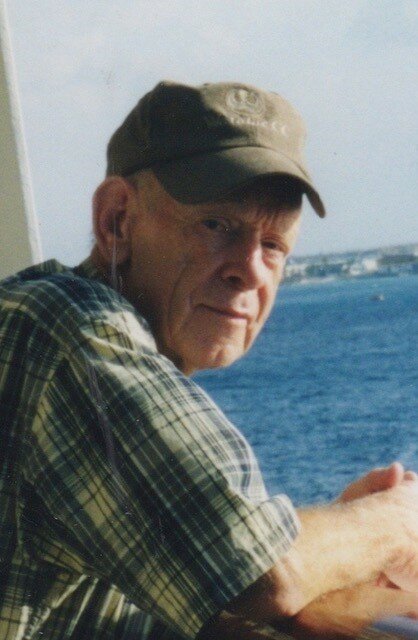 Obituary of Edwin B Garbutt

As a boy growing up during the Great Depression, his mother deceased and his father gone, Edwin Garbutt was foisted upon his older sister’s household. He did not have a good start in life.  Despite inauspicious beginnings, he built a happy life for himself and his family.

On September 27, 2022, Edwin Britton Garbutt, loving husband and father passed away at the age of 90.

Edwin was born on August 2, 1931 in Staten Island, NY to Edwin and Laura (Britton) Garbutt. He served as a US Marine in the Korean War, returned home to serve on the New York City Police and Fire Departments.  On Jan 8, 1955 he married Sonja I. Dahlin and they raised a daughter, Lauren and a son, Edwin.

Edwin was artistic. He won a mail-entry drawing contest as a young man. Upon retiring from the fire department, he established a sign business which needed no advertising. Word-of-mouth about his beautifully hand-lettered and carved signs generated more work than one man could handle. His creative talent put his two children through college and built him a comfortable retirement.

He knew how to have fun. A frisbee tucked away in the trunk of his car frequently made an appearance at family outings. His rapid motioning of the frisbee was the cue to run long for the bright yellow disk that was about to sail through the sky. His basement and garage housed badminton, ping-pong, and horse-shoe sets, all ready for a weekend or after-dinner game. Tennis, golf, stick ball, baseball, and so much more were all in his repertoire.

He loved good-natured teasing and harmless practical jokes. His nephew (Petey), his mother-in-law, daughter and grandkids got the lion’s share of the teasing. It usually involved a startling scare from around the corner, a skillfully made prop or playful ribbing intended to get a rise out of his victim. An ongoing joke between him and a like-minded neighbor inspired by an ant hill on the driveway became a one-upmanship contest that concluded as a neighborhood ant attraction, including a sign beckoning passersby to, “See the ants,” and an ant food dispenser that advertised, “Feed the ants - .25 cents.”

He loved music. We knew he was working in his shop by the sound of classical music drifting into the house. A paint spattered radio shack portable radio with extendable antenna accompanied him to all remote jobs. A hand-made auxiliary speaker box that plugged into the phone jack improved its sound.

He loved to read. He usually started and finished each day reading newspapers, magazines and books.  Although there had been no money for him to attend college, his curiosity and prolific reading served as his degree and he indeed was a well-informed and knowledgeable man.

However, his most significant trait was that he could fix anything. He tirelessly tinkered and fixed all day, every day. He wired circuits, cut glass, sweated pipes, mixed concrete, and woodworked. I think his knack for fixing things is what enabled him to lead a successful, happy life.  You see, he loved his wife dearly. It was she and her loving parents who first inspired him. He witnessed the example of his father-in-law’s kindness and dedication to his family and his brother-in-law’s “firm but fair” approach and made them his role models. Like fixing rough-running engines, broken toasters, and flickering lights, he overcame his unfortunate start in life. Surprising his wife with birthday flowers, a Valentine candy box, or simply laying out her morning/evening medications and vitamins faithfully, every day demonstrated his love and nurtured their relationship. When his children arrived, he glued their broken toys, helped with homework, and provided sound advice to life’s seemingly unsolvable problems. He cared, he fixed, and his tireless efforts kept everything running smoothly. In his later years when he began to tire, and his resources for fixing things were reduced to whatever was at hand, a piece of cardboard, a needle and thread, a strip of tape would serve to fix wobbly tables, threadbare sweaters, and TV remotes with loose battery covers. Tirelessly maintaining, fixing and tweaking things into good working order was how he approached life.

It's because of my father that I fix things. And of the many impressions my father left on me, his ability to fix things is the one that is the most prominent and indelible. Keeping things working well and looking good imparts order to a chaotic world. It brings joy and it reminds me of him every day. I think I finally know what he was really doing when he fixed things. I understand now dad. Thank you.

There will be a military funeral honor internment at Fort Snelling National Cemetery, October 12, 2022 at 11:30.

To send flowers to the family or plant a tree in memory of Edwin Garbutt, please visit Tribute Store
Wednesday
12
October

Share Your Memory of
Edwin
Upload Your Memory View All Memories
Be the first to upload a memory!
Share A Memory
Send Flowers