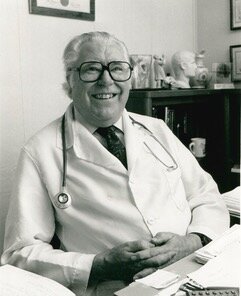 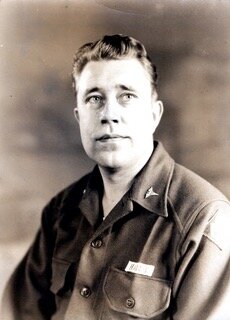 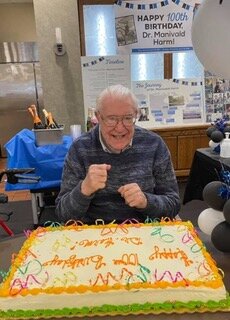 The amazing life of Dr. Manivald Harm ended peacefully in the early hours of October 12, the culmination of more than 101 years that took him from Voru, Estonia, to St. Paul, Minnesota, with many stops along the way.

Dr. Harm was born April 19, 1921, in Voru, Estonia, where he met his future wife, Melosina Kirotaja, as a high school student. Their studies at Tartu University ended abruptly as Germany and the Soviet Union battled for control of Estonia during World War II. Following the war, they became displaced persons in Tubingen, Germany, where they married, he completed medical studies, she earned a pharmacy degree, and their first son was born. They came to the United States as refugees in 1950, ultimately building a fulfilling life in Mackinaw, Illinois, where he served as the town’s doctor for four decades, raised three sons and was an active member of the community. He was elected staff president of the former Mennonite Hospital of Bloomington, Illinois, in 1976. Dr. Harm was a proud member of the U.S. Army, serving as a lieutenant in the medical corps in Korea in the immediate post-war period. His always sharp and curious mind, interest in current events including online Estonian news, deep love of classical music and pride in his family remained strong until his final days.

The Harm family is deeply grateful to The Wellington Residence of St. Paul for providing “Doc” with what he called “home, sweet home” for the past five years, and to Regions Hospital, Our Lady of Peace Hospice and the Wellington team for their compassionate and dedicated care in his final days.

Services and interment with military rites at the gravesite in Mackinaw will be scheduled at a future date. Memorials may be made to the Deer Creek-Mackinaw (Illinois) High School Music Department or the Mackinaw Rescue Squad. No flowers, please.

To send flowers to the family or plant a tree in memory of Manivald Harm, please visit Tribute Store

Share Your Memory of
Manivald
Upload Your Memory View All Memories
Be the first to upload a memory!
Share A Memory
Send Flowers