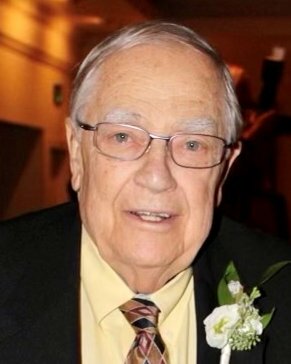 Passed away peacefully in his sleep at the age of 90. Preceded in death by his wife of 68 years Mary, and parents Hubert and Glenna Meier. Hugh is survived by his five children, Cindra (Bruce) Borrman, David (Jennifer) Meier, Saundra (Thomas) Cullen, Daniel (Krista) Meier, Thomas (Milo) Meier. He is also survived by twelve grandchildren and eleven (one to be born in October) great-grandchildren, and his brother Thomas (Judy) Meier of Andover, MA. Hugh graduated from St. Paul Central High School. In his late teens, he worked as a counselor and guide at Widjiwagan YMCA Camp, where he held so many fond memories. Hugh attended Macalester College in St. Paul and following graduation, worked for the 3M Company his entire career.  He enjoyed spending time and sharing stories with family and friends, and was a true fan of all MN sports teams. Hugh and Mary enjoyed summers at their cabin in northern Minnesota and winters in Florida.  There will be a private family interment in November. Hugh will be missed by all.

To send flowers to the family or plant a tree in memory of Hugh Meier, please visit Tribute Store

Share Your Memory of
Hugh
Upload Your Memory View All Memories
Be the first to upload a memory!
Share A Memory
Send Flowers