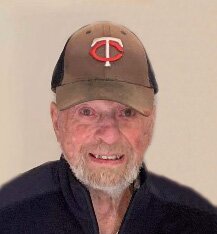 Lorraine Domagall on December 29, 1956. Together they were blessed with four beautiful children.

As a young man, Roger joined the Army and after proudly serving his country, he was honorably discharged. He was a man who liked a good cigar and to visit with friends over a few beers. He was a fan of the Minnesota Twins and Vikings and was also an avid fisherman. He loved muskie fishing and spent many summers with friends and family at Bone Lake in NW Wisconsin.

He was preceded in death by his parents Lauretta and Albert Appleby, his beloved wife

A celebration of his life will be on Friday, December 16, 2022 with visitation at 10:00 am followed by a prayer service at 11:00 am at Willwerscheid Funeral Home, located at 235 Wentworth Ave W, West St. Paul. Burial will take place at a later date at Ft. Snelling National Cemetery.

To send flowers to the family or plant a tree in memory of Roger Appleby, please visit Tribute Store
Friday
16
December

Share Your Memory of
Roger
Upload Your Memory View All Memories
Be the first to upload a memory!
Share A Memory
Send Flowers