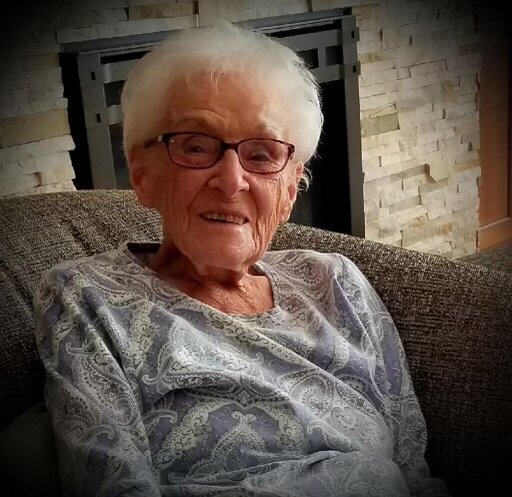 Lorraine was born to Ethel and Fred Lanz on June 19, 1922, in St. Paul and grew up in the city’s Como Park neighborhood. She attended elementary school at St. Andrews, completing her high school education at St. Joseph’s Academy.

With WWII in progress, Lorraine married Gordon Andersen on April 8th, 1944. After briefly residing in Tacoma, WA, Lorraine returned to St. Paul when Gordie was deployed to Europe. Lorraine spoke often of being a newlywed during this time in history.

Lorraine and Gordie built their home on Shryer Avenue in Roseville in 1952, raising their family and enjoying their neighbors and friends. They joined St. Rose of Lima Catholic Church, where Lorraine remained a member for 70 years. Lorraine was active in several parish ministries including the Altar and Rosary Society. She provided baked goods and served countless funeral luncheons for more than 40 years.

Lorraine was a gracious homemaker, excellent cook, and a much-appreciated baker. She enjoyed being a mother, grandmother, and great-grandmother. Lorraine’s children’s spouses considered her a world-class mother-in-law. Her home, while spotless, was calm and welcoming. It holds endless memories of time spent together.

In addition to her family roles, Lorraine enjoyed friends, maintaining longtime relationships while forming new friendships throughout her life. Lorraine volunteered, golfed, and bowled in a league well into her 80’s. She continued to play bridge until age 98. After over 50 years on Shryer Avenue she moved to Green House Village in Roseville, she quickly became a part of her new community. Many thanks for the support and kindness she received there.

Funeral services will be held at St. Rose of Lima Church, 2048 Hamline Ave. N. in Roseville, MN. Visitation begins at 9:30 a.m. followed by a Memorial Mass at 10 a.m. A luncheon will be served in the Parish Center after Mass. Interment at Roselawn Cemetery. Memorials to St. Rose of Lima Parish or donor’s choice.

To send flowers to the family or plant a tree in memory of Lorraine Andersen, please visit Tribute Store
Thursday
18
August

Share Your Memory of
Lorraine
Upload Your Memory View All Memories
Be the first to upload a memory!
Share A Memory
Send Flowers